The Words We Use

The Words We Use

The UI interface for many pieces of software including CMSs like WordPress are referred to as a “Dashboard”. Obviously the leap from car dashboards come to mind with its similar elements such as dials, gauges, and instrument panels. But the term goes back much further, which is apparent when the word is broken down. Why dash? Why not console, control, system, etc?

The term dashboard for cars was adopted from its predecessor, horse carriages. The dashboard was a literal board of wood between the passenger and the horse. The purpose of this board was to stop mud and debris from being kicked up on the passenger when the horse would pick up speed or “dash”. Reflecting on this, we we could have been just a small butterfly effect away from having web interfaces referred to as mud flaps.

Like much of modern digital design, its origins and terminology are rooted in print. Capitalization terms like “Uppercase” & “Lowercase” come from the physical metal letters used in traditional printing press letter pieces. These sets of metal letter pieces where expensive and numerous, making it important to be well organized and always placing them back properly in storage. One way to organize them was to place the capitalized letters in the top drawer or “Upper Case” and uncapitalized into the “Lower Case”. This term evolved and was adapted into modern digital fonts to still identify fonts, despite the fact no more drawers are used.

One of the more surprising influencers of modern digital terms is the classic comedy group “Monty Python”. The most direct mark they left was with the modern powerhouse of programming languages named “Python”. It was given its name by creator Guido van Rossum after reading a script for “Monty Python’s Flying Circus” and was inspired by the term “python” due to its size and uniqueness.

Another influence we run into every day in our emails is “SPAM”. It is associated with the processed lunch meat as most assume. But the connection to this was from a Monty Python skit about the canned concoction. In the skit there is a restaurant where the patrons are flooded with Spam options for every dish. It is everywhere, inescapable, and ruining their experience. A perfect analogy of junk mail clogging your inbox.

“Firewall” has been used in many industries for decades before the rise of the internet. Most commonly automotive design, architecture, and machinery. Similar to dashboard, it can be explained by breaking down the words. It is a literal wall used to stop the spread of fire. Either from an engine compartment, garage, or factory floor. It was adopted by developers because it serves a similar function in security. Providing a barrier from a high risk area and the user. Stopping the spread of a dangerous situation.

The small bits of browser data we refer to as “cookies” come from UNIX developers in the late 1970s and has evolved a few times over the decades. The original full name of these pieces of data was “Magic Cookies”. Which was a nicknamed based off the common Chinese restaurant treat “fortune cookies”. This name was inspired by these novelties as fortune cookies, much like browser cookies, carry small bits of information or strings of text wrapped up in a secure delivery package.

The most contested origin in all of tech. There are many claims as to why and when we first referred to issues and failures in a computer program as “Bugs”. But the one common string in all of them is that it wasn’t originally an analogy. Actual insects caused real problems for pioneers of computer programming and engineering. Often told in a folk tale like fashion on message boards is that it first comes from early punch card systems. These computers would use a system similar to the modern Scantron, where cards with holes were read by a machines. These holes were arranged in a way to represent a function or process to run. And that a important task when running these machines would be to remove or “debug” any insect that may have crawled in and become squished onto the card. Causing the machine to misread it as a hole.

A more concrete source of this origin comes from 1945 where a U.S Naval officer named Grace Hopper recovered a moth interrupting the relays of Harvard’s Mark II computer. The heat and lights of these room sized computers were known to attract all sorts of bugs. This event isn’t believed to have coined the phrase, but is often pointed to as the source of its growth of popularity. Mainly due to its now infamous physical documentation among developers. 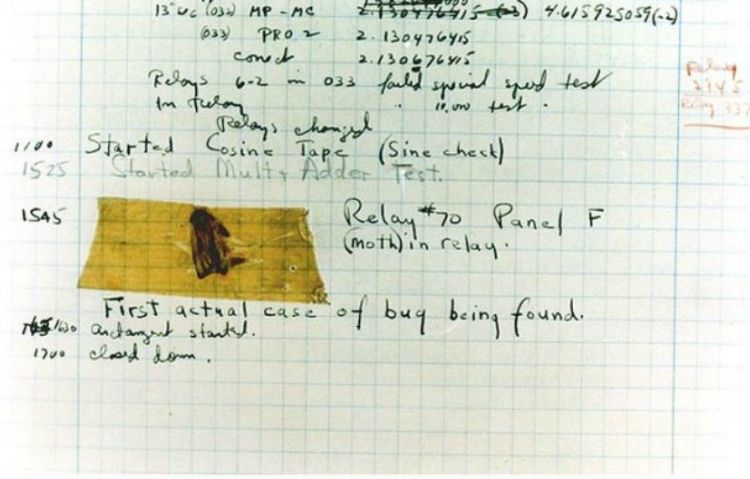 Others sources point to even earlier use of the phrase used among engineering as far back as the 1800’s. Such as a direct quote from inventor Thomas Edison which many believe to be the term being used in the same modern sense.

‘Bugs’ — as such little faults and difficulties are called — show themselves and months of intense watching, study and labor are requisite before commercial success or failure is certainly reached.