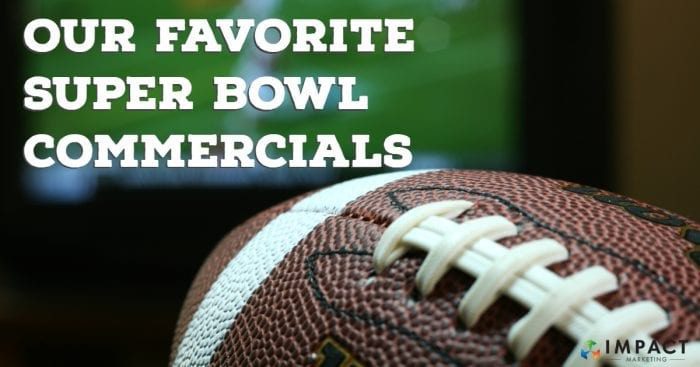 Super Bowl commercials are some of the most-watched advertisements of the year. In fact, studies show that millennials tune in more for the commercials than the actual game.* We rounded up our favorite commercials from this year and past years to share with you.

My favorite commercial for the super bowl this year was the Burger King’s #EatLikeAndy. The commercial made me think of my art history classes to try to remember where it came from or if it was even real and it was. The clip is from a 1982 film “66 Scenes from America” where the real Andy Warhol just sits in front of a camera and eats a Whooper for 4 mins. It goes along with one of Warhol’s quotes “Art is what you can get away with.”

Although I prefer Miller Lite, this commercial is brilliant. It tastefully (no pun intended) pokes fun of its competitors for using corn syrup in the brewing process as if this is a bad thing (Hey, I am an Iowan. #LongLiveTheSyrup!). The ad is full of one liners and the over-the-top ridiculousness. The portrayal of their journey is one for the ages.

The commercial really spoke to me and encouraged me to seek help so that I may overcome my inner food fantasies.

Of the 5 or 6 Super Bowl commercials that I felt were very well done, one of my favorite commercials was the Walmart “Famous Cars” spot.

This version is the extended cut that didn’t air during the game. The version played during the game cut the pumpkin carriage from Cinderella and the foot powered car from the Flintstones.
One very enigmatic omission, and a big miss for me, is probably one of the most iconic cars from television and film – The General Lee. Given the controversy around the rebel flag, Walmart probably went the safe route and chose to not include the orange 1969 Dodge Charger.

One notable inclusion is at the very end of the spot and easily missed. It’s the 1979 Ford F150. It was too much of a focal point, and too old of a vehicle to be included at random. It turns out, it’s the truck from the long running TV show “The Waltons.” A coincidence it is not, as it just happens to be name of the company’s founder. Well played WallyWorld. Well played.

Overall, this is a very good spot. It’s grabs your attention, keeps you interested and communicates the message of grocery pickup in a very effective manner. I’m giving this spot 4 out of 5 starts. The one-star reduction is simply because the Duke boys get no love from the big W.

Fast & Furious 9 has gone from street racing to a buddy cop movie with superpowers.
The next one in the franchise has to use time travel or be set in space.

SHARE:
PrevIt’s All About Strategy NextGet Your Name Out